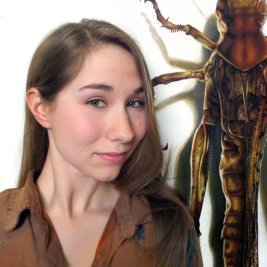 I am a multimedia artist who uses both natural and artificial materials to create tiny objects packed with social significance. I combine traditional mediums such as oils, watercolors, and graphite with organic materials such as dirt, hair, egg shells, and insects to make artworks that blur the line between painting, sculpture, and assemblage. Highly influenced by memories of growing up in the suburbs of Oklahoma City, my work often showcases evidence of aging human constructs. I pair images of cracked streets curbs, abandoned houses, and blind-covered windows with images of insects, animals, storms, and tornadoes. By juxtaposing found-objects with carefully rendered images, I explore the tension between illusion and reality.

Laura Murray was born and raised in Oklahoma City, OK.  She received her BFA from the School of Visual Arts in 2012.  She has completed two residencies: the Oklahoma Summer Art Institute Residency in Oklahoma City, and the Snug Harbor Artist Residency Program in Staten Island.  She is the recipient of several artist awards, including the Edward & Sally Van Lier Visual Artist Fellowship Grant and the 440 Gallery Choice Award.  Her work has been exhibited in numerous venues, including Postmasters Gallery (New York, NY); Concepto Hudson (Hudson, NY); Arc Gallery (San Francisco, CA); the Oklahoma City Museum of Art (OKC, OK), and Galerist (Istanbul).  Her work has been featured in New York Magazine, Dazed Magazine, The Nation, and Vice’s The Creators Project.

She was a guest artist lecturer at Google headquarters NYC, and recently co-hosted a creative workshop at Hunter College with art-editor for the New Yorker, Françoise Mouly, and author, Nadja Spiegelman.  She currently lives and works in New York, NY.

Please send all inquiries to LMurray89(at)gmail(dot)com.